The Suns Seem to Like Alando, and I Need a Seersucker Suit

I was immediately pleased to see Alando get drafted in the first round, and by a legitimate team like the Suns that has a good record of developing talent and maximizing players' various skill sets. Of course, the dude at Ron Karkovice Fanclub (to the right), immediately rained on my parade by describing Alando as "a guy with no jump shot" who thus would not fit in with the Suns, and predicting his trade before the season begins. Harumph. The Suns certainly seem to like A-Tuck, and their coach correctly noted that his athleticism is "off the charts." Suck it, Trebeck. Anyhow, the most comprehensive coverage of the Suns drafting of Alando comes from the Suns themselves. Here you go. The Suns' compliments lead me to believe they won't trade him away, and the quotes from Bo down at the bottom are neat.

Now, as a person who picks up NBA news from Milwaukee and Chicago, I have the following comments. First, the Bucks decision to tell the Chinese socialist sporting authority to bug off is hilarious. I hope Herb Kohl brings the power of the U.S. Senate to bear. Or they trade Yi for Corey Brewer or Jeff Green. The Bucks need defense, and I see Yi getting pushed around like Shawn Bradley. I must admit, however, that a "We Are The World" frontcourt of Bogut (Aussie), Charlie Villanueva (NYC, but parents are immigrants from the Dominican Republic), and Yi (Southern China) could be pretty entertaining. 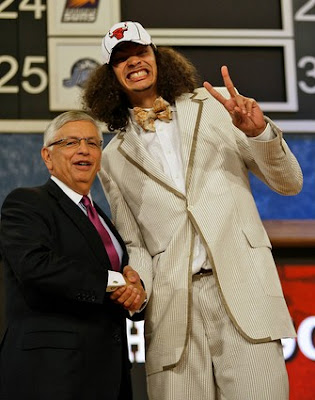 Here was his own description of the look in the Chicago Sun-Times:

''I think the bow tie definitely was a great look. I think the suit was really, really funky. I said it was going to be funky. I've gotten a lot of love so far for the suit."

I don't know if the Bulls improved by drafting Noah. (Ben Wallace did look old and tired in the Pistons series.) But I do know that Joakim is probably the least attractive person ever produced by a Miss Universe finalist, and that he should make Chicago NBA news far more entertaining.
Posted by Mr.Man at 9:12 AM 1 comment:

Story of the Day, Part Deux

Sadly, this one is about Alando's projection to last well into the Second Round of the NBA Draft this evening, despite his collegiate success. I'm no scout, and I tend not to watch the NBA, but it certainly seems to me that Alando has the athleticism and the work ethic to become a very successful pro. Wherever he ends up, I wish him the best and will be pulling for him. See here.
Posted by Mr.Man at 11:32 AM 1 comment:

All Times Central
Posted by Randy Moss at 3:27 PM 1 comment:

Story of the Day

So now that we're months away from football season, and months past the end of college basketball season, I'm starting to feel a bit desperate. Seriously, it takes me about 2 minutes to read the sports section these days--after I take a quick look at the baseball box scores to check up on my fantasy teams, I'm essentially done. And even on the miracle of the internet, finding interesting stories on the teams you really care about has become difficult. To help ease the pain, as it were, until we get closer to football season, I'm going to start directly linking to quality Badger or Packer stories when I find them. The nuggets of interest should be shared. I found a decent one today-- a column from the State Journal about two incoming Badger men's basketball recruits. Cheers.
Posted by Mr.Man at 9:01 AM 3 comments:

Several bits of unfortunate news have emerged recently. First, the Packers' starting middle linebacker Nick Barnett, who the team recently resigned to a long-term contract, was arrested after an alleged altercation outside a "club" in Appleton. Not good, particularly given the NFL's serious crackdown on poor off-the-field behavior and Abdul Hodge's performance in the Seattle game last season. Lets hope that Nick didn't really do anything and the police end up dropping the charges. Nick needs to conserve his energy and focus for his "excessive celebration dances after making routine tackles" thing. (I still haven't forgiven him for letting the receiver get behind him on 4th and 26.) Also, who knew there were any non-strip club clubs in Appleton?

Second, Marquette's Mighty Mouse, Dominic James, has pulled out of the NBA draft, and opted to return to school. You could argue that's good, I guess, because it means more attention will return to Wisconsin state college basketball next season. But it also means the Papists will be ranked highly entering the season, and will be favored to beat UW in Madison this winter. James is a talented guy, although a terrifically streaky shooter, and his absence, in my very early book, would have led to UW extending its current streak over the Gold. Combined with games at Texas and Cameroon Indoor Tennis Stadium (yes, that's purposely misspelled) the Badgers' pre-Big Ten schedule is looking pretty rough. As the bishop says in Caddyshack, "Ratfart!"

(Recent addendum-- the Milwaukee Journal-Sentinel has also reported that John Clay, the man-child running back recruit from Racine who could very well press P.J. Hill for playing time this fall, may not qualify academically. As our second highest rated recruit, and the best running back the state high schools have produced since Brian Calhoun, it would be horrible to have Clay become ineligible. Bear down on the books, John, wherever you are.)
Posted by Mr.Man at 8:39 AM 1 comment:

At no point this season do I want the Packers to "Circle the wagons".
Posted by Randy Moss at 4:26 PM 1 comment:

As they introduced the spurs tonight, they played the storm trooper music. If I was a spur that would get me so jacked up. I got jacked up in my room watching it. I always thought Pacer fans should've chanted, "Reggie Sucks", in Indianapolis. Being the bad guy is dope. Unless you're killing ewoks. That's not dope. I guess Eric Snow and Damon Jones and the rookie they play are pretty ewokish. But Greg Popovich wouldn't give two shits to save their lives or there shitty little planet. Eric Snow looks like he's 59.
Posted by Randy Moss at 7:56 PM 3 comments:

Does this movie not look awesome? "Was your vagina drunk?" "Maybe . . . I've reacted unfavorably"

The Green Bay Press-Gazette, perhaps the most Packer-centric newspaper in all of the land, has a running blog on various team off-season practices. So if you're hurting for some Packer action, it provides some nice, though meaningless, updates. Here it is.

Also, someone forwarded this borderline inappropriate article to me, and I thought I'd pass it on. The science is actually interesting, in my opinion.

Finally, later today I'm going to post the European trailer for the new Judd Apatow movie "Knocked Up". Apatow directed "The Forty Year Old Virgin" and was one of the writers on "Anchorman". Thus, he rules. I find the clip from the Euro preview hilarious. Prepare yourselves.
Posted by Mr.Man at 9:18 AM No comments: